MICHAEL A. VENTRELLA: Years ago, a friend pushed the World Fantasy Award-winning novel TOWING JEHOVAH on me, and it sounded fascinating. Being a typical writer/reader, I always have dozens of books on my “Have to Read and Will Get Around to Some Day” pile. JEHOVAH jumped to the top of the list after I had the pleasure of meeting James Morrow at Worldcon in Montreal a few months ago as we both patiently waited in line for substandard Canadian coffee. It was as good as had been recommended (the book, not the coffee), and now I have the two sequels next in line on my “Have to Read” pile.

James Morrow is a graduate of Harvard and the University of Pennsylvania (not necessarily in that order) and has won acclaim for a variety of fantastic novels which weave together religion, politics, and philosophy. A Nebula-award winner, Morrow continues to challenge and entertain. His web page is here.

James, thanks for taking the time! It is obvious that much of your work concerns religion, from the Godhead Trilogy to ONLY BEGOTTEN DAUGHTER. What do you find in this subject that makes it so desirable?

JAMES MORROW: Every day, I wake up and I say to myself, “How extraordinary! Here I am, James Morrow, thrown into a world in which the vast majority of bipedal beings believe in benign supernatural intervention, and I don’t buy one bit of it! What’s going on here? Why am I totally at odds with most of my fellow thinking primates? How could such a large majority of humans, many of them brighter and better traveled than I, subscribe to a world-picture that is manifestly not the case? How can they imagine that the Bible enjoys a divine origin, when so much of it bespeaks our pettiest impulses? How can they not see the bankruptcy of the benevolent-God hypothesis? Why will they not face the probability that all deities are human inventions?

This paradoxical state of affairs variously confounds, amuses, saddens, frustrates, and infuriates me — but mostly it gives me the energy to create my stories and novels. I’ve been accused of writing primarily out of anger, but I believe I’m more bewildered than bitter. My bedrock perplexity seems to make for compelling fictive thought experiments, or so my more sympathetic readers tell me. Evidently God put me here to argue against His existence.

VENTRELLA: Have you faced any censorship or protests because of these works?

MORROW: No serious protests. Occasionally I’ll receive an e-mail from a Christian conservative who, having blundered into my website, is concerned about the status of my salvation. Normally this correspondent will prescribe a verse or two from Saint Paul, but sometimes he’ll glibly inform me that I’m going to Hell.

VENTRELLA: Are you disappointed?

You’ve actually struck a nerve here, Michael. Like all novelists, I’m a bit of a narcissist: I think my readership should be significantly larger. So, yes, I am indeed disappointed that Ralph Reed or the Vatican has not yet come gunning for me.

VENTRELLA: What was interesting to me after reading TOWING JEHOVAH was that the truth of the matter was just accepted; the novel does not disavow the Christian God nor does it satirize Him, but it certainly looks at Him in a new way. Had earlier versions and drafts taken a different approach? 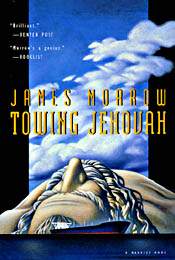 MORROW: I’m glad you found that novel to be relatively nonpolemical. Preaching is the death of fiction. When I embarked on the thought experiment that became TOWING JEHOVAH, I wasn’t sure where I was going, and I was pleased to be surprised by many of the scenes that emerged from my pen. A literal pen: that particular novel was initially written in longhand.

At the start of the project, I didn’t realize TOWING JEHOVAH would give me a chance to satirize my own worldview in the form of the Central Park West Enlightenment League. Nor did I foresee the weirdly reverent tone of the inverse-Eucharist scene, in which the starving supertanker crew survives a famine by eating God’s deconsecrated flesh. And Neil Weisinger’s search for the En sof is also supposed to be taken at face value. I guess you could call TOWING JEHOVAH a novel by an atheist who’s trying to empathize — up to a point — with people of faith.

VENTRELLA: In TOWING JEHOVAH, a message is that “enlightenment” isn’t always truthful. The church wants to hide the truth in its own interest. The atheists, represented by the Central Park West Enlightenment League, also want to hide the truth for their own interest. Deceit is not something to be admired on either side, but in the sequels, the consequences of the truth are severe. Do you believe that it is sometimes better to not know the truth?

MORROW: As an equal opportunity satirist, I wanted to suggest that any group that would style itself the Central Park West Enlightenment League might very well — at the end of the day and faced with an apocalyptic challenge — decline to embrace a body of data that contradicted its worldview. When you’re in the business of fashioning sardonic comedies, nothing is sacred, not even atheism. My sympathies lie almost entirely with my secular brethren, but in a crisis I suspect that most of us would behave as mere feeble and fallible humans, not as courageous avatars of the truth.

Truth is a sticky commodity. The physical sciences long ago figured out that they can get by perfectly well without making grandiose truth claims (merely predictions based on theories), but philosophy and religion and the arts don’t have that option. Like the Ibsen of THE WILD DUCK and the O’Neill of THE ICEMAN COMETH, I can certainly imagine situations where the truth proved fundamentally destructive, and I was indeed playing with that idea in the Godhead Trilogy — though I ultimately come down on the side of truth-telling, as I also did in my novella CITY OF TRUTH.

VENTRELLA: Was the series planned in advance or did you decide to write the sequels after the first was completed?

MORROW: Based on some preliminary TOWING JEHOVAH chapters and an outline, I managed to convince Harcourt Brace to sign up for the whole trilogy. Needless to day, all three finished manuscripts departed radically from my original plan. BLAMELESS IN ABADDON was initially titled TERRA INCOGNITA, and the outline was more concerned with the trip through God’s brain, with the Trial of the Millennium functioning merely as a denouement. My first sketch for THE ETERNAL FOOTMAN had the characters searching for the Holy Grail. Eventually their quest leads them to a divine bedpan, an idea I rejected as sophomoric even by my standards.

VENTRELLA: What sort of research do you do for your novels, especially when discussing areas in which you may not be trained?

MORROW: For better or worse, the advent of Google has made the task of research 100 percent easier than in days gone by. I say “or worse” because I believe there was something vaguely romantic and even heroic about the novelist’s quest for the sort of quirky facts and period details that can bring a scene to life. But today these gritty particulars are available at the stroke of a key. It feels like cheating.

I like to say, “First I write the novel, then I do the research.” That remark is not entirely facetious. In the case of my novel-in-progress, an epic about the coming of the Darwinian worldview, I’ve already written scenes set at Darwin’s estate and on the Galapagos archipelago. I intend to visit both sites before putting the book to bed: in my experience such on-the-ground investigations can enrich a novel immeasurably — and yet the present drafts are not entirely lacking in credibility, and I could probably get away with simply claiming I’d done the primary research.

VENTRELLA: How did your education affect your writing? (As an aside, do you miss Boston? I went there for law school and loved it…) 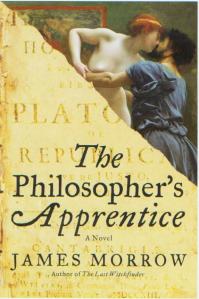 MORROW: Boston is a terrific city, commensurate in my affections with New York, Paris, and London. My days at the Harvard Graduate School of Education particularly paid off in my recent novel called THE PHILOSOPHER’S APPRENTICE, in which a philosophy student is hired to implant a conscience in an adolescent clone. When I was at Harvard, everyone was excited about Lawrence Kohlberg’s profile of children’s moral development. I ended up keying Londa Sabacthani’s education to the famous Kohlbergian dilemmas.

VENTRELLA: Do you tend to think of the story first, or a concept that will lead to a story? It seems that much of your work involves interesting questions of religion and philosophy that lead to a “what if?” scenario…

MORROW: Although most novelists, myself included, want to reach the reader at an emotional level, I believe that fiction writing is primarily an intellectual process. When a scene isn’t working, the problem is not that you’re failing to channel some cosmic Muse from a transcendent plane of reality — the problem is that you’re not thinking hard enough.

I couldn’t imagine beginning a novel or short story without an audacious premise in mind. Many writers evidently work in a completely different fashion. They’re happy to start with a memorable character, a vivid setting, a personal theme, or an intriguing initial situation, with the overarching concept emerging only during the composition process.

VENTRELLA: What do you know now about the publishing industry that you wish you had known when you first started out?

MORROW: My career was launched in a fashion that I took to be ideal: hardcover publication by a major New York house — to wit, the edition of THE WINE OF VIOLENCE that issued from Holt, Rinehart and Winston in 1981. I gradually came to realize that such an achievement, while not an occasion for sneezes, is by no means synonymous with having a career. I had not found the Holy Grail after all.

It took me awhile to figure this out, but unless the publisher is really behind you, with a fired-up sales force, a serious publicity budget, and a viable marketing strategy, any given novel is likely to die a dog’s death at the box office. Not until TOWING JEHOVAH, my fifth book, did I actually enjoy the services of an in-house publicist.

VENTRELLA: What projects are you currently working on? Give us a teaser!

MORROW: I just finished a short story called “The Vampires of Paradox.” It will appear in IS ANYBODY OUT THERE?, a forthcoming anthology about the Fermi Paradox, edited by Nick Gevers and Marty Halpern. Now I’m free to return to the Darwin project, which I believe will be my best book yet — though I must admit I adopt that attitude towards all my novels: otherwise I would never finish them!

VENTRELLA: What sort of advice would you give an aspiring writer that you wish someone had given you? 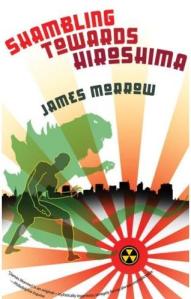 MORROW: Try to figure out a way to make fiction writing its own reward. You can’t count on the marketplace or the publishing industry to validate your efforts — but you can learn to take satisfaction in a well-turned phrase, a witty description, a remarkable character, or a puissant idea.

VENTRELLA: What are you most proud of? What would you like to be remembered for?

MORROW: I hope that my posthumous biographer will pay particular attention to BLAMELESS IN ABADDON and THE LAST WITCHFINDER. In those two novels I believe I came fairly close to realizing my artistic ideal — that is, fiction in which the dance of ideas is at once complex and entertaining. Among my shorter efforts, I like to think that people will be reading SHAMBLING TOWARDS HIROSHIMA long after I’ve gone to live with Jesus.