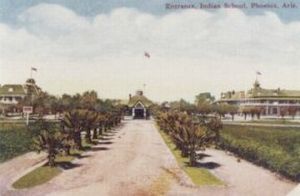 I attended Central High School in Phoenix, Arizona, next door to the Phoenix Indian School. As a freshman, I played softball with my team on the south field, which was separated from the boarding school by a flimsy hurricane fence. Occasionally, we’d see a few Indian boys, their fingers hooked through the wire as they watched us silently, but we never spoke to each other. This border — and the Phoenix street named Indian School Road — marked the limit of what I knew about the school.

Not until 1991, when the Indian School’s closing coincided with my writerly interest in my hometown, did I investigate further into this educational system designed to make many tribes into one and, through enforced assimilation to Anglo culture, to make Native Americans disappear. Though the so-called “assimilation era” ended in the 1930s, and the Indian School curriculum was reformed to teach academic subjects and not just basic trades, the words of Indian Commissioner Thomas Morgan are irrevocably part of the school’s foundation: “It’s cheaper to educate Indians than to kill them.”

Artifacts tell the story. Before the new Steel Indian School Park opened on the site in 2001, archaeologists excavated the contents of a 230’ x 165’ trash dump near where my team fouled a few balls. Among the tools of assimilation abandoned there between 1891 and 1926 were the porcelain heads of white dolls used to socialize girls and rusted steam whistles that blasted at intervals to teach the concept of clock time. But there is also evidence of resistance: forbidden fetishes and pottery sherds smuggled from home; flaked stone points showing off a traditional skill (and the school’s fine-china plates used to practice); a cache of combs not marked, as required, with a name to show appreciation for individual possessions and tangible wealth. These relics are beautifully subversive — ironic imagery in a landscape where students were compelled to trade tribal clothing for uniforms, native languages for English, the Native American we for the American I.

I thought of the Phoenix Indian School recently, as I reviewed Sherman Alexie’s new book, War Dances, for the Philadelphia Inquirer. Alexie’s exile from the Spokane Indian reservation to attend an all-white high school was self-imposed, prompted when he was issued an outdated math book his mother had once used. But the outcome of his education is the same as that of a kid taken from his tribe: neither assimilation nor a return to tradition, but a troubled and complicated identity – one he articulates in poems, stories, screenplays, and novels.

Given the part educators have played in oppression, no wonder Alexie lampoons academics — like the “the Sioux writer and scholar and charlatan” orating on sovereignty and literature in the book’s title story, or the tenured professor “strangely thrilled to list all of the oppressors” in his poem, “Go, Ghost, Go”:

And I, a red man, think he’s correct,

But why does he have to be so humorless?

2 thoughts on “The Phoenix Indian School by Elizabeth Mosier”